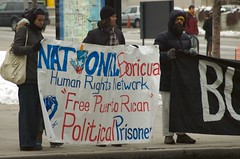 On a cold Saturday, December 8, the Peace Pledge sponsored its 5th annual commemoration of International Human Rights Day. Peace Pledge, along with American Friends Service Committee, Amnesty International, Christian Peacemaker Teams, 8th Day Center for Justice, National Boricua Human Rights Network and the National Lawyers Guild held signs, banners and dramatic blown up photographs of torture victims to denounce US sponsored torture from Abu Grahib to Guantanamo to right here in Chicago with the infamous former Chicago police commander Burge and his crew’s torture of Black men. We denounced the new attorney general Mukasey’s refusal to state that waterboarding is torture. Honking car horns and support from passersby demonstrated the growing awareness of the refusal to support torture. However, that verbal support needs to be translated into action to demand an end to torture.

The Hands on the Prison Glass: Letters of Oscar López